Back to Women of Great Taste Sort Of 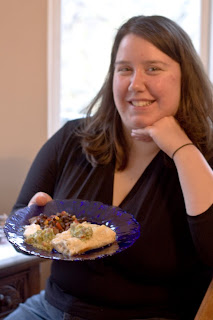 On Wednesday Kate and Charlie came over for dinner and I made Enchiladas Con Pollo from Women of Great Taste. It is not a new recipe but one of our favorites. A very mild Mexican dish. In the past I remember it taking much longer to put it together. Perhaps because I had bought a rotisserie chicken and cut it up earlier in the day so all I had to do was chop green onions and grate cheese for the filling it didn't seem so labor intensive. The enchiladas are baked in a basic white sauce with canned green chili's added and more cheese on top. Delicious as usual and every one must have been hungry because there were very few leftovers.

Sometimes I feel like a throw back to our very distant ancestors; the ones who spent their days foraging for food. Take the day I was cooking for Kate and Charlie for instance. First I had to go to my favorite rotisserie chicken place a little ways up the street. That was after I went to my favorite breakfast place for breakfast. Then I walked the other direction to gather the guacamole and salsa (best guacamole in Chicago) to serve with the enchiladas. I took those home, cut up the chicken and then after a short nap took the bus to the grocery store for the rest of the ingredients and rushed home to cook. A whole day centered around food. And when I am not gathering, cooking or eating it, I'm blogging or talking about it. Maybe I need to try refocusing. I did go to a hypnotist once. I asked him if he could give me the suggestion that I stop thinking about food all the time. He said the problem is that when you try not to think about something that is all you think about. So what's the answer? I have no idea.

There is a side benefit to gathering food, however. Besides the exercises, I get to enjoy the fruits of other people's labor. I think I have mentioned in the past how in Chicago spring seems to last much longer than it did in St. Louis. I was often depressed at how fleeting the beauty was in Missouri. This year though, Chicago has been a bit atypical. We had a very warm snap that caused acceleration in blooming and fading. The tulip trees lasted only about a week and a half. On my walk I found lilacs and even peonies already blooming. But the daffodils are still there and the tulips as well as other flowering trees. It is so nice of people to work hard (or pay others to work hard) for my enjoyment.
Posted by Unknown at 1:29 PM 4 comments:

I am not a big fan of ham. I like to eat it at Christmas and Easter but mostly even at the holidays I buy ham so that I can make bean soup. Sometimes I make bean soup with out getting a ham first, using ham hocks or just bacon, but I prefer to make it from a ham bone that has been enjoyed during the holidays.


I remember liking ham more as a child until Grandmother died when we were inundated with hams from thoughtful neighbors and friends. If my memory is correct none of us wanted ham for a very long time after that. I'm not sure if it was because it reminded us of Grandma's death or we were just sick of ham.


When I was living in St. Charles I started buying Honey Baked Hams from the Honey Baked Ham store. We had a store in St. Charles so it was close and convenient. Their claim to fame is their spiral cut and special honey glaze. I always thought they were better than the hams at the grocery store although certainly pricier. Not everyone agreed with me but the crowds at the store around the holidays did. Since living in Chicago it has been a little more difficult to obtain a honey baked ham. The closet store to me is in Morton Grove about 9 mines away and not easily gotten to by public transportation. So I borrowed Kate's car on the Saturday before Easter.

Kate was working on Easter so we planned the Easter meal for Saturday evening. The other great thing about the Honey Baked Ham store is that they have prepared sides that are very tasty. And I was being lazy. There was a line as usual when you wait until the last minute. I waited in line for about 30 minutes but the day was beautiful and the crowd was friendly. I got the ham and 3 sides. I did make deviled eggs and a birthday cake for Kim.


Finally about a week after Easter I made the bean soup. It was cold and dreary outside so it was a good day for it. I still remember the first time I had bean soup. I was probably a teenager though might have been younger. The family was invited to a house of one of Dad's colleagues. . I know I didn't want to go. I hated that kind of thing, expected to mingle and talk at least to the other kids. I remember telling Mom I didn't want to eat the bean soup (I had never even heard of it before.) Mother told me I would eat the bean soup and I did. It was delicious.


For some unknown reason I decided to not make my usual bean soup and looked for a recipe at AllRecipes.com. The first recipe that popped up when I put in ham and bean soup was titled The Best Bean and Ham Soup. Posted in 2008 it had 188 reviews and 41/2 stars out of 5. Most of the reviews I read hadn't changed anything except to add more beans or vegetables. They thought the soup was a little too bothy. So when I made the soup I resisted putting in a second bag of beans but did add more onion, carrot and celery.


The best part of cooking soup and especially bean soup is the aroma. I was in and out of the apartment doing laundry, running up to 7-11 and every time I came back the smell was intoxicating. This recipe said to cook the soup for 8 hours, remove the ham bone and simmer another 2 hours. I had mine on for about 7 hours total.

What I discovered in the end was that although the soup was hearty and delicious it wasn't the bean soup I wanted. I should have gotten a clue from the reviews as a lot of people said "I don't really like bean soup but I liked this". In reality it wasn't bean soup at all. I would consider it more of a vegetable soup (called for vegetable broth and V8 juice as well as chicken stock). The bean flavor was over shadowed by the broths and vegetables. The problem is I really like bean soup. So now I am going to have to find a ham bone and make some real bean soup. I found a recipe for navy bean soup. Water, ham bone, beans and onions. You can't get more basic than that.
Posted by Unknown at 3:22 PM 1 comment: