It is Saturday.  I want to go out and see a new movie and no one is available to go with me.  I can do several things.  1) I can go alone.  I've done that frequently and I actually enjoy watching movies in the theater by myself.  But sometimes I want company.  So 2) I can put an ad on Craig's list and ask if anyone wants to see Cowboy's and Aliens.  I actually did that and had mixed results but that is a different blog.  Or 3) I can check out Meetup.com and see if there is a movie group going to see the movie I want to see.  I did and there was.  And so last Saturday I saw One Day with a group of 4 other people.

Meetup.com is a social network.  Their new slogan is "Use the Internet to get off of the Internet."  It is about meeting people in person, face to face, not about reading what your friends are doing on Facebook, or chatting in chat rooms.  It is about getting together.

According to the article The Long and Curious History of Meetup.com by Adrianne Jefferies, in late 2001 co founders Matt Meeker and Scott Heiferman were looking for a start up. They had lots of ideas but kept coming back to Meetup for two major reasons.  "One was Bowling Alone, Robert Putnam's book about the collapse of community in America.  The other was that something had changed in New York:  Strangers had started saying hello.  It was after September 11, and people seemed suddenly aware of each other."  When launched Meetup.com was an immediate success.

In 2004, Meetup and John Dean joined together to for an unprecedented grass roots campaign.  Today Meetup has 8 million members in 100 countries, 65000+ organizers, 80,000+ meetup groups and 50,000 meetups are scheduled each week.

I have been a member of Meetup.com for a number of years now.  I think my first meetup group was Chicago's Digital Photographers.  I've taken a few classes with them, and recently took a new friend to a meetup.  But overall I have been a very inactive member in that group that boasts 3738 members.  I've attended a couple of knitting meetup groups but haven't found them to be much fun.  I belong to several other groups that I have never attended.

Recently however, due to a change in relationship status, I  needed to become more active and decided to take Meetup.com by storm.  I joined a brand new group called Chicago Curvy Girls DIY Fitness Club.  It is for us curvy girls not quite ready for the gym.  The organizer Deanna is fabulous.  She has really put her heart and soul into this group.  Less than a month old, she has already had 10 meetups.  Last Saturday we met in Milliennium Park for free yoga and Zumba and then Sunday morning we met in a park close to where I live and walked 2 miles.  I can't keep up with the group yet, but Deanna comes back and keeps me company.

I mentioned the Saturday and Sunday Night Movie Club.  I joined that group on Saturday afternoon and saw One Day with them on Saturday night.  As with the nature of meetup groups some people are more interesting than others.  It is probably not a group I will go back to.

Sunday I was looking for something to do and cruised the hundred of happenings on Meetup.com until I found a Djembe group in my area.  Most meetup groups are free unless donations are asked for to cover the cost the organizer pays to Meetup.com.  Some meetup groups however are a way for people to teach others for money or to promote a business.  But at 12 dollars a session, it is much cheaper than the lessons I took at Old Town School of Folk Music and the organizer, Rick is great.  (He also teaches at Old Town School).  I am now back to playing my drum.

The most fun I had, however, was on Friday evening.  I had been looking for a city group for people over 50.  I couldn't find one so I started one myself.  The City's Wine and Diners. With in a week of starting it I had 60 members and 20 people had signed up for the first meetup on Friday with 6 on the waiting list.  Organizing can be stressful with finding a venue, setting up guide lines, worrying if people are really going to show, etc.  But it was well worth it.  People dropped out of course but my wait list filled in and we ended up with 12 very cool people, grateful to me for starting the group.

Three days, 5 Meetups.  It was a very good weekend. 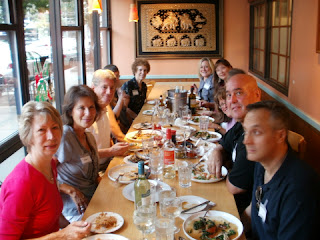