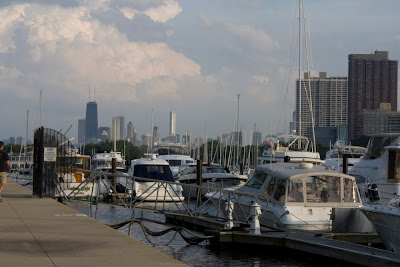 For my birthday, my daughter, Kate, took me sailing on Lake Michigan. No she didn't sail the boat, she purchased a 2 1/2 hour cruise for the two of us. It is the first time I have sailed on Lake Michigan. The boat was a very loved 1986, 32 foot Hunter named Lost. The captain, Steve, spends his time sailing and playing the drums in a blues band. He truly does what he loves. The night was perfect. The captain was drinking Sailor Jerry's and Coke, Kate and I were drinking a Riesling. We started at 7 pm and left a warm, humid day for the cool breezes of Lake Michigan. The wind topped at about 15 knots and we reached full boat speed at 8 knots. It has been 5 years since my last sail but it will not be another 5 before my next.
Sailing dissolves the separation of man and nature. With his canvas sails, the sailor catches the wind offered by the heavens and together they propel the boat across water and time. This is why I love sailing and the reason my roommate told me I looked totally different returning from my sail. She couldn't describe it exactly, probably a combination of total relaxation and exhilaration.

I fell in love with sailing on Long Island Sound when my sisters visited Sag Harbor for our sister's retreat. There was a regatta and they needed extra people on the boats for balance because of the windy conditions The four of us graciously volunteered. Our job was to move side to side when instructed to and try not to fall off. My sister Judy almost did. It was the first time I felt the wind and spray in my hair and understood man's draw to the sea.
Most of my sailing experience has been on Lake Carlyle, a large lake in southern Illinois, with my dear friend, Mark. He fell in love with sailing about the same time I did, built a boat and from June until October invited me to sail every other week. Many times in the summer months there would be little to no wind. But out on the boat everyone agreed that out on the water, even if we weren't moving it was better than working. It was better than almost anything I could think of. On the days we did have wind we could sometimes sail from one end of the large late to the other. Mark would let me "drive" and taught me a lot about sailing.
I sailed on a Windjammer ship once out of Granada. I was disappointed to learn that although the sails were fully extended they kept the motor running. It seems that that was the only way they could be assured of getting to the right place at the right time. Still it was fun to be on the water.
I sailed the Seattle Sound for my 50th birthday. That day there was unfortunately no wind and we just sat most of the three hours. But we were still on the water and the sun was shining (something unusual for Seattle.) Later that night when we were having dinner at the top of the Space Needle, we saw the same boat that we had taken go out of the harbor. The winds were much better then and they were cruising.
But of all my sailing experiences the one I remember the best is the day Susan took me out on her small boat in Chatham. It was a breezy day and we chose to stay within the safety of the bay, but what a ride it was. Because the area was relatively small we got to maneuver the boat frequently coming about, zig, zagging back and forth. I remember the boat leaning way over a time or two and leaning against the opposite rail. A sense freedom and sheer delight not experienced in any other endeavor. 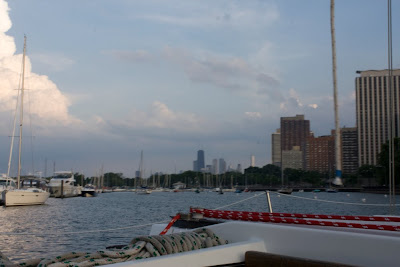 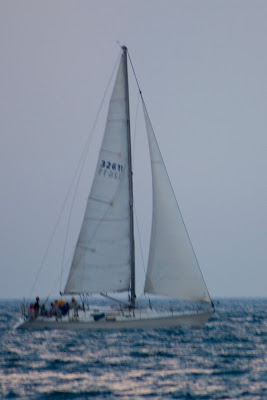 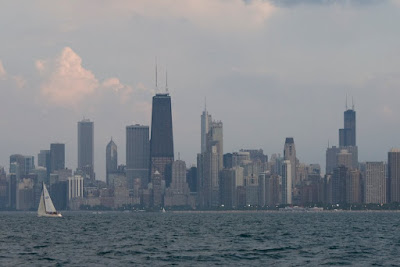 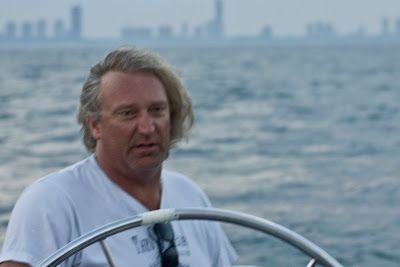 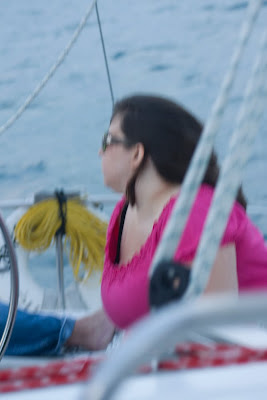 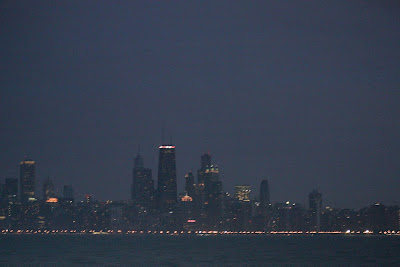