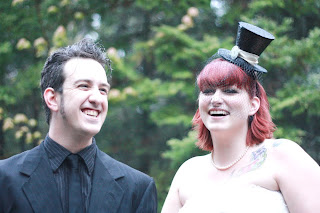 Last week I went to my nephew's wedding in Ely, Minnesota. Being a very small wedding I was the representative from the groom's mother's side of the family partly because I live the closest to Ely and partly because my daughter, Rachel was in the wedding party. She was a groom's man which tells you right away this was not a traditional wedding.

John and Lauryn exchanged vows and rings in the rain in a small clearing in the woods on the property of Lauryn's sister's house. The thirty guests stood in a semi-circle around the clearing. Lauryn's fathe

r performed the ceremony as well as catered the reception. The ceremony was beautiful, the light rain just adding to the magical atmosphere. The theme of the wedding was Alice in Wonderland complete with the white rabbit leading the way down the "aisle". The crochet match was rained out.
In thinking about weddings , I think about the importance of family. I feel sorry for those that don't have strong family bonds. Although I don't see my family (brothers and sisters, daughters) as often as I would like or even talk to them as often as I might, there is a bond so strong I can think of nothing that could break it.

I went to my writing group yesterday and we wrote about a sibling. I chose my oldest sister, Susan, to write about. In the fifteen minute timed writing I barely scratched the surface of our relationship. The thing I remember most about our childhood is the stories she would tell us at night, always leaving us with a cliff hanger. We would beg her to continue but she never would. Later I would find out that she needed the next day to work out the story for herself. A woman in my group said that while friends come and go family is always there. Susan seems to hang on to friends forever but I have not been so lucky, (though it probably has little to do with luck.) But I have my family.

Maintaining my new family seems to be a little harder. I find myself falling into the same pattern as with my brothers and sisters; not communicating with my kids as often as I would like. Kate is a little different because she lives close to me and we maintain a more frequent exchange of ideas. With Judy and Rachel it is hard not being in their everyday lives. I would love nothing more than if they would move to Chicago but alas, the winters (or maybe it's mom.) The key to raising happy children (and that is all we really want isn't it?) is to love them unconditionally (easier said than done) and remembering that they are not a reflection of ourselves. They are their own persons and what ever they decide to do (as long as it isn't becoming a serial killer) is O.K. As much as I complain about how critical my mother was, she never wrote us off when we took paths not to her liking.
Posted by Unknown at 9:45 AM