Art in the City

The great thing about living in Chicago is that there is always something to do no matter the season, though summer especially is filled with outdoor festivals and activities. I sadly have not taken advantage of all that Chicago has to offer. My roommate, Kim, on the other hand always seems to know what is going on. She suggested the Gold Coast Art Fair at Grant's Park this past weekend.

The fair is a "juried" event which means not just anyone can set up a booth. You have to meet certain standards. In all there were 578 booths of quality paintings, sculptures, photography, furniture and glass and of course, jewelry. 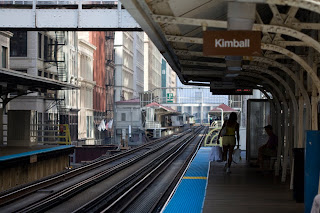 Kim and I headed down town via the brown line. We took our time meandering over to the art fair taking in the new Chinese Sculptures in Millennium Park and watching the kids (and adults) play in the Crown Fountain. 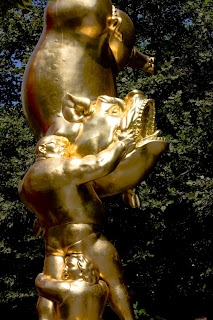 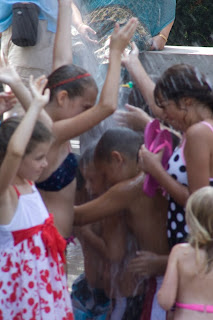 Once at the fair we were pretty overwhelmed with everything there was to see. Not that I had really intended to buy anything but the prices were a bit overwhelming too. But the art was great. It was a warm day with little shade and then to our unhappiness before we could see everything we wanted the fair closed early at 3 pm due to a stupid preseason Bear's Game. I am not sure what one had to do with the other unless it was about parking.
Before we left one artist caught my eye. His name is danilo cuevas. He paints primarily in oil and then scans the paintings to create digital images. From his bio: "an extremely versatile and prolific artist, cuevas is best known for his urban landscapes and still life botanical. when viewing his paintings, it is easy to see how they reflect his true knowledge of his subject paying meticulous attention to line, form, detail and color."
I bought a digital copy of his poppies on black. I am drawn to still life though many people find them boring. It is a direction I would like my own photography to take. He was a very nice and personable guy. Not all artist are. It helped that it was the end of the day and there was no one else at this booth. Because I was his last customer he gave me a notebook with one of his paintings on the front. A simple purple flower that I love as well. You can see his work at his website: http://www.printedcanvas.com/. 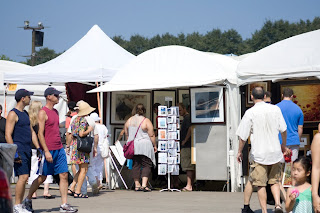 Because our time was cut short due to the Bear's game, I decided to return to the fair on Sunday by myself so that I could have more time to get inspired. Going on my own had certain advantages. Kim and I tend to worry about each other getting too tired and frequently rested. On my own I could go at my own pace. I have noticed in life that it is important for me to mix company with being by myself. Too much of one or the other isn't good for me. 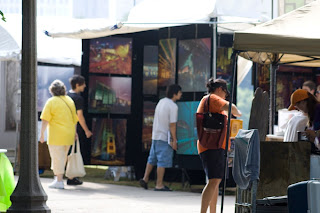 I headed straight for the fair on the second day and spent about two hours taking my time at a lot of booths. I still did not see everything. Mostly I focused on photography. There were three that stood out for me. I did not get names but I will describe their work. The first gentleman was not a digital photographer. He says he does very little cropping when developing his film much preferring to capture what he wants as he takes the picture. He does his own developing with very little enhancement. I have always maintained that digital photography has come such a long way that film is no longer necessary. I changed my mind this weekend. There is a quality in film (at least in this photographer's work) that isn't captured in the best digital. I told him I might have to give up digital. He was a bit snobbish and said no you won't, this is way too difficult. And truly that is why I and most of the world have gone digital. It is easier, and much more versatile. Besides, setting up a dark room even for black and white film is expensive and problematic. Color chemicals are carcinogenic and hard to dispose of.
The second photographer has some great photographs mainly of South Carolina. He had a huge picture of an banyan tree. What was amazing was the absolute clarity of every detail from the pebbles on the ground to the leaves on the tree. I know how he must have taken the picture. He had an extremely high quality wide angle lens and goosed up the f stops as far as he could. At that point very little light is entering the camera so you have to use a tripod and a long exposure time and hope there is no wind. I wish I had gotten his website address.
The third was a gentleman who takes digital photographs but prints directly on to canvas with a specialized printer and ink. Wonderful end product. Good photographer as well. I didn't get his website either.
I ended up buying a pair of earrings from a really nice woman, Daniel Desjardins, from Lafayette, Louisiana. We talked for awhile. She told me a little bit about life on the festival circuit. She wasn't selling much. She says she really doesn't like the selling part. Says she does much better when a friend comes along that does like to sell. Being an artist she has little interest in the business end of her work, hates computers and thinks there might be a job for someone catering to the artist community.
I also bought a cool pen. When I told the young lady I was going to use it in my writing group she said it was a Zen Pen to provide all the inspiration I needed. I certainly hope so. 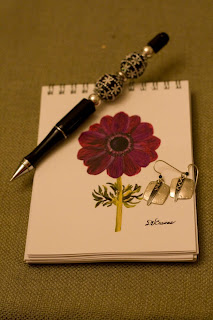