O.K. so blogging on a regular basis isn't quite as easy as it sounds. But one of my goals in starting a blog was to get my siblings writing blogs as well so that we could stay connected in our lives. And now two of my siblings, Susan and Bill have blogs and I only have to work on the other four. (In laws please feel free to jump into the blogging arena too. I'm talking to you Kathy.)

Christmas was a wonderful time. Judy and Rachel came into town and stayed for a week. I had the entire week off. Kate unfortunately had to work part of the time. None of us had much money and it was cold outside so we spent most of the time just hanging out, playing spades, watching the NCIS marathon and of coarse cooking. I do find that cooking is much more fun when you have someone to cook with and someone to help clean up. My daughters and I tend to use every dish and utensil in the house when we cook so lots of dishes being washed. Thank heavens for my dishwasher.

Women of Great Tastes played a central role in our culinary delights. First I did one of our beloved standards Baked Potato Soup. Rachel became a vegetarian when she was 10 years old. Because of that I modified the recipe in the book to make it vegetarian. Easy to do, skip the bacon and substitute vegetable broth for the chicken broth. Everything else, the onions, milk, half and half and cheese are permissible. Although Rachel now eats some meat we all agree that we prefer the vegetarian version. I should have double the recipe because it didn't last very long.
The Tuesday before Christmas Rachel made a salsa and baked some vegetables with sweet potatoes that turned out great. (Not from the book.) But she did make her own chips for the salsa using a version of a recipe in the book. She also made A wonderful crab dip. Christmas day Judy made a delightful spinach quiche (her own recipe). Kim (my roommate) had cooked a ham earlier in the week which we munched on continuously.
Our big meal was Christmas Eve because Kate had to work Christmas Day. I brined the turkey that Kate received as a bonus from work. (Some companies still do this). Brining is becoming popular because the meats now being produced have less fat and therefore less flavor and are less moist. This is especially true of poultry and pork. Brining is basically soaking the meat in a very salty solution. The salt draws the water into the meat. Sometimes sugar and vegetables and herbs have been added to the mixture. The recipe I used for the turkey I got off the Internet and everyone agreed it was very tasty indeed. The biggest problem with brining a turkey is finding a container large enough to keep the turkey immersed and then finding a place for it in the refrigerator. We also had Kim's ham, a rice and broccoli cheese bake, Kim's stuffing and Rachel made the almond cranberry sauce from Women of Great Taste that I had made at Thanksgiving. Hers was better. 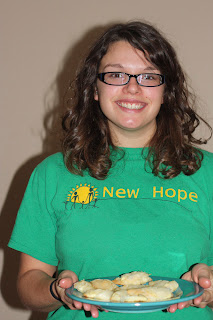 Over the weekend Rachel and I decided to try the Phyllo and Phyllings from Women of Great Taste. Neither one of us had ever worked with phyllo dough. Rachel did all the work, I just watched and gave advise. It turns out not to be as hard as I expected. We had planned on making the feta cheese filling, the crab filling and the spinach filling. The recipe is a bit time consuming so we only did the feta which were excellent. Today I finally got around to making the crab filling. If I do it again I will cut way back on the mustard. It only called for 1/2 of teaspoon of dijon mustard but it completely overwhelmed the other ingredients.
Also on the weekend after Christmas I boiled the turkey carcass for broth and made another of my favorite recipes from the book, Chili Blanco. The original recipe calls for chicken thighs and chicken broth. I used left over turkey and the homemade turkey broth. The chili was amazing. Again I should have doubled the recipe.
That was my Christmas. Quite and wonderful. It is now New Years day and I have some things to say about time passing but this blog is already too long. I will save it for next time. Wishing everyone a very happy new year!