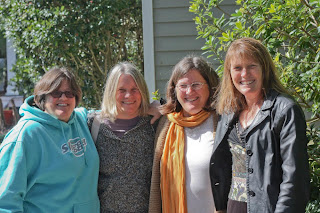 Had a great weekend with my sisters. I'm just sorry it only happens once a year.

I have been thinking more about the cooking vs following recipes idea. Look at your collection of cookbooks. Yes I know you all have them, except maybe Bill but I'm sure Cathy will let you borrow one of hers. If you will notice there are "cook books" and there are recipe books. Recipe books tend to be books done by groups such as the Wichita Junior League's Women of Great Taste. I have one that Mother did with the Kansas City Philharmonic Orchestra Guild call Composing In the Kitchen (kind of a catchy title.) I have several others. Cook books on the other hand are generally written by one person and often on one subject or type of cooking such as my rice cookbook, cookie cookbook, and pan grilling cookbook. Then there are more general cookbooks like The Joy of Cooking which I don't own and Betty Crocker Cookbooks one of which I do own. My roommate has a very old addition that is fun to look at. In this category is an old cookbook my sister, Judy, gave me called The Everything Cookbook. As the name implies it is quite a large volume.

With recipe books you just get recipes. With cookbooks you get both recipes and instructions on how to cook. The Everything Cookbook is quite a treasure that I had not explored until recently. It taught me the different ways to thicken a sauce. Not that I'm at a point where I would say "oh I think I will make up a recipe and thicken the sauce using this method". But now I know why a recipe calls for flour (I actually knew that before) or an egg (which I didn't know). One can also thicken a sauce with vegetables, bread, heavy cream, sour cream, reducing it or putting it into a blender. The section on sauces also tells me I can make a broth from bones removed from the meat I'm cooking to add flavor to my sauce. (would this put Swanson's out of business?) The next chapter I'm going to look at is the one on spices. I'm virtually clueless about spices.

On the same note there are websites. There are some like Allrecipes.com that give you recipes. And then there are some like reluctantgourmet.com that is more into teaching. It was this website that first taught me about brining. He also explained to me that the most important thing when trying to be a gourmet cook is getting all your ingredients together before you start to cook. Mrs Meyers (remember my 7th grade homemaking teacher?) told me the same thing but I thought it was just an organizational thing. Nope. Well certainly an organizational thing but also it is important so that you aren't over cooking what you are cooking while you are preparing the next ingredient. And now I have prep bowls which I use and it isn't just because I like to wash more dishes. I was recently looking at his section on sauces and learned that my mother wasn't the only one who served dried out meats. So did his mom. Perhaps healthier but not as tasty as with a little sauce.
So I think I am learning how to cook. Through reading, through trial and error and then I remembered another way that we learn. Probably the way we learn most of life's lessons. From observation. Maybe mother never taught me to cook but I know I learned from her (both bad and good) through watching her. Not just about cooking but about life as well. Aunt Helen was my favorite cook growing up. She made wonderful fried chicken, mashed potatoes, banana cream pies, brownies with icing and my favorite chocolate chip oatmeal cookies. (Love oatmeal, hate raisins, chocolate chips the perfect answer.) As I sit here in the quiet of my office I can hear her telling me something but I don't remember the words. I watched her fry chicken. I watched Mom oven fry chicken because she didn't want to go to all the trouble to pan fry it as Aunt Helen did. I have oven fried a chicken, I have never pan fried a chicken. What does that tell you? Probably that like Mother I am a bit of a lazy cook. However sometimes on a Sunday afternoon I go to KFC and eat fried chicken remembering the Sundays of my youth. It isn't Aunt Helen's, fried chicken, not by a long shot. But I can pretend and then go home and bake chocolate oatmeal cookies.
Note: In my mother's defence she cooked for 9 people most days. Aunt Helen when she was having us over for Sunday dinners usually cooked for only two. I have no excuse.
Posted by Unknown at 8:04 AM