When I lived in St. Charles, I had found a hair dresser not far from where I lived who was wonderful.  I went to her for several years.  She always gave me a great hair cut and did a great job with color. And then she left town.  I was devastated.  You really only need two things in life.  A good hair dresser and a good mechanic.  Since I no longer own a car, I really only need the hair dresser.

Since moving to Chicago I have been moving from salon to salon looking for someone to connect with.  I had found a place near my first apartment in Rosco Village.  I think Kate had steered me there and her roommate had steered her.  But then the hair dresser I liked left, and I didn't like the next person and then when I decided to go back the place was closed.  For a while, I was going to a shop just off the Brown Line.  The hair cuts are 12 dollars.  No shampoo, sometimes a blow dry but really always a good cut.  The women in the shop I think are Russian though I'm not sure of their nationality.  I didn't always get the same one but it didn't really seem to matter.  For some reason when I decided to get my bangs cut (it was probably a Sunday and my shop was closed) I went to another shop in Rosco Village where some of the hair dressers from my old shop had ended up.  The man that cut my hair did a good job but something just wasn't quite right.  Then when my bangs started growing out I made the terrible mistake of going to a Hair Cuttery (a chain for those who aren't familiar).  Why do I not remember that I never get good cuts from those places.  I told the girl (she was young) that I wanted my bangs above my eye brows not half way up my forehead.
I was trying to let my hair grow out.  Now my bangs looked hideous, someone call them my baby bangs and that is what they looked like, or a little kid's.  My hair was driving me crazy and impulsively (I always get my hair cut impulsively) decided to whack it off.  Again unfortunately it was a Sunday.  My shop was closed.  So I went to another one around the corner that was open.

I had a bad feeling from the start.  The girl was young.  No one else was in the shop.  I had a picture with me.  Kate said the picture looked like a mullet so maybe it was a good thing the cut didn't come out like the picture.  (I think I just want to look like the person in the picture and think the hair cut will do that for me.)  The young woman (probably just out of school) took an hour and a half to cut my hair.  I could tell as she was cutting it it was a bad cut.  But what are you going to do while she has the scissors in her hands?  She actually teased my hair when she was styling it.  I haven't had anyone tease my hair since the 60's or was it the 70's.  Even though the end product didn't look too terrible, it was just not a good cut.  A good hair cut falls naturally and continues to look good even when it grows out.  I had been struggling with this cut since day one.

So last week, (it was Monday and I thought my old shop would be open) I decided to cut my hair once again.  But I was over in a part of town nowhere near my shop, I had gone to my Weigh Watchers meeting, had lunch with Kate because she works in the area and decided I just didn't want to go way over to Kimble to get my hair cut.  I walked by a Hair Cuttery and almost went in when the little voice in my head said YOU ARE NEVER HAPPY WHEN YOU GET YOUR HAIR CUT AT ONE OF THOSE PLACES.  So I thankfully walked on.  The next two salons I walked past were closed because normal salons are closed on Mondays..

I walked for a while looking for an open salon and finally found one.  The stylist was busy cutting a guy's hair but said I could wait.  Normally that salon is also closed on Monday's but Jeffery (the stylist) just started working at that shop and he likes to work on Mondays so it was open.  And they had a 15 dollar walk in special.  Later I found out that hair cuts are normally $45.  I liked Jeffery from the start.  He agreed that I had gotten a very bad hair cut.  He didn't agree with exactly what I wanted to do (he also said it would look too much like a mullet)  and we compromised.  Oh and when he was washing my hair he massaged my head for a few minutes.  That in it self would keep me coming back for more.  Jeffery has been cutting hair for along time.  He is from Seattle and owned his own salon there before deciding to move to Chicago a few years ago.  He was easy to talk to.  Interesting.  And I got a good hair cut.  I think as it grows out it will continue to look great.

So now living in Chicago, I have many choices when it comes to getting my hair cut.  I will go back to see Jeffery even though his hair cuts are 45 dollars and my old shop only charges 12.  Why?  Because as with a good mechanic the relationship is almost as important as the work being done.  The beauticians in my old shop were nice enough but there wasn't a lot of communication or connection going on. 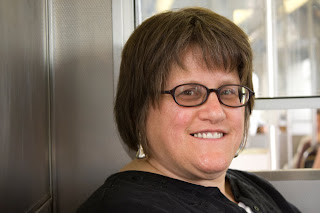 After about 2 years of having my hair in it's natural state color wise, I have an appointment to have Jeffery color it.  He says he can highlight it without coloring it first and it will look great.  I believe him.  My bangs are still growing out.
Posted by Unknown at 1:57 PM