I have been pretty much addicted to soda (pop, coke) since my early college days.  I was working at a small diner and we could have all the fountain drinks we wanted.  An endless fountain of sweet liquid to drown out how much I hated the job.  I finally quit the job but not the addiction.  There have been times in my life where I would finish a 2 liter of Pepsi in an afternoon.  And start another one for the evening.

From time to time I have switched to diet soda but have always felt that aspartame is probably worse for me than sugar.  I also notice that when I drink diet soda (or regular soda) my water consumption goes down and my craving for sweets goes up.  The longest I've ever gone with out soda was about 6 months.  For some reason I decided (like an alcoholic) I could have just one and I was right back on the addiction wagon.

Part of the problem is that while I actually like water, I get tired of it.  I want something else to drink.  I can drink juice which at least has some vitamins but the calorie count is the same as soda and whole fruit is better.  At least with juice I don't drink two liters but still 16 oz is really too much.

I have never learned to drink coffee.  I have never liked tea.  As a kid when dad would barbecue outside in the summer time and mom would fix iced tea, I would sneak into the liquor cabinet and get a coke to pour into my glass.  The color was a little darker but I guess no one noticed.  Half ice tea and half lemonade was a pretty good drink I found later on but still too high in calories.  Part of the problem when you are over weight is that you aren't eating or drinking for the taste of something.  If you were, you would be satisfied with just a glass of what ever and that would be fine.

My writers group meets every week at Argo Tea.  You can't just sit there and not order something (you could but that isn't very polite) so I tried the green tea and the black tea with out much success.  I don't even like tea with honey or sugar.  And then I tried the hibiscus tea in their signature drink Tea Sangria.  I know it has fruit and hibiscus tea but I'm not sure what else.  111 calories or 2 points for a 16oz drink and part of that may be the fruit.  It tastes like it might be sweetened.  But it is very yummy.  I also like their hibiscus steamer which is hibiscus and apple cider.

So I bought some tea to bring home.  It is a mixture of hibiscus and dried apple.  I make it every morning at home or work, drink it hot or cold.  I was sweetening it with a little fruit juice and then a little honey.  This morning I drank it with out sweetener and it tasted great. 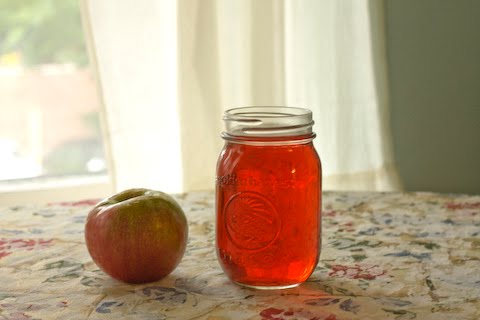 It turns out that hibiscus tea is reportedly very healthy.  It supposedly lowers blood pressure and may help with weight loss. For me, it is a nice naturally low calorie drink that makes me feel good.
Posted by Unknown at 9:54 AM